You are here: Home / AppGratis Banned By Apple For Being A Black Hat App Store Ranking Network 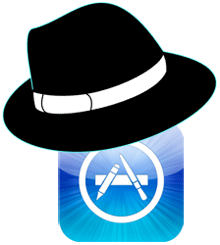 Did you hear the news that AppGratis was pulled from the Apple App Store? AppGratis defines itself as a company that “offers the opportunity to reach new exciting audiences in more than 30+ countries. Every year we deliver more than 100,000,000 non-incentivized app installs for app developers.” They clearly want people to think of them as “media” and not a “network.”

Apple didn’t think so. Apple pulled them from the App Store.

How did the “media” or “network” work?

(1) You pay AppGratis to promote your app.

(2) They promote your app inside their own app.

(3) Your app skyrockets to the top of App Store’s charts.

Apple kicked them because they manipulated the App Store’s search results.

It is interesting because this is one of the first popular networks to be targeted by Apple for manipulating the search results. You can read AppGratis take on this on their blog and you can read a counter by Jeremy. You can read how he equates it to how Google manages search ranking manipulation themselves.

The neat part is Google’s Matt Cutts goes in to the Hacker News thread to basically clarify that buying links is considered by Google as Black Hat SEO. So most likely Google would consider what AppGratis is doing as black hat App Store SEO. Although Matt didn’t say the later.

Both Apple and Google have their ranking issues in their App Stores – what AppGratis was trying to do is fool himself into thinking that Apple appreciates what they do to help improve the App Store’s ranking by manipulating it.

Expect more of these crack downs from Apple, even if the App Store search may suck.